Help with the accessibility tool

You can increase or reduce the size of the text by clicking the up or down buttons on the toolbar. The text can be increased by up to 3x its original size.

Click this button to change to a different typeface. There is a choice between serif, sans-serif and comic sans fonts.

Making Life Easier website has a variety of different themes to choose from including a high-contrast colour scheme. You can also view the website in a text-only format.

The reading ruler is to assist you with reading the website. The ruler will follow the movements of your mouse cursor, covering the space above and below to make it easier to read one line at a time.

For blind and visually impaired users we recommend NVDA (NonVisual Desktop Access), a free "screen reader" application which reads the text on the screen in a computerised voice.

You can control what is read to you by moving the cursor to the relevant area of text with a mouse or the arrows on your keyboard.

Your connection appears to be slow. The website and some of its features may take some time to load.

This page contains available information and services in North Lanarkshire. Any PDF files will require a PDF viewer such as Adobe Reader (external link) to open.

Go back to local info 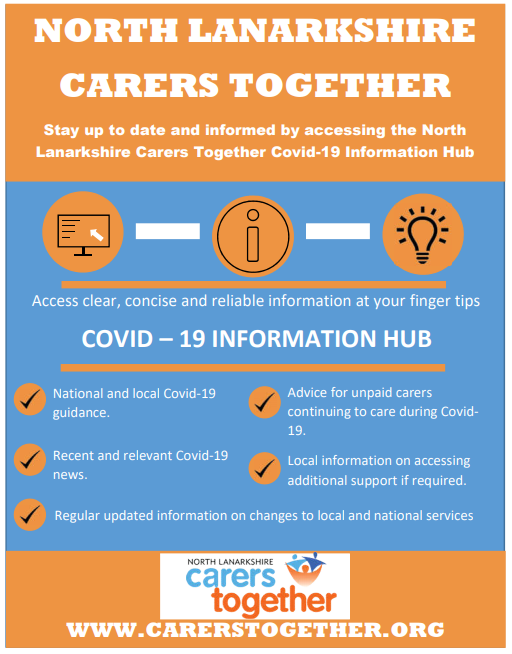 This section provides a range of local services and well-being information for you to find advice or seek further assistance to support your health.

Take our quiz to see if you are a carer

The NL Locator provides details on a variety of different activities such as fitness classes, arts and crafts, social groups, etc. You can view activities in your local area.

Alcohol Focus Scotland is Scotland’s national charity working to reduce the harm caused by alcohol. The website contains information of national and local organisations who may be able to help, and also has sections containing Alcohol information, and advice on getting help.

Please be aware that by fitting the following product it will mean the person has no means of cooking hot food.

SGN manages the network that distributes natural and green gas to 5.9 million homes and businesses across Scotland and the south of England. They also provide the gas emergency service in these areas. They understand that vulnerable customers, such as people with Alzheimer’s or autism, need extra safeguarding in place. Statistics show that elderly and people in vulnerable situations are at a much greater risk from gas leaks and fires in their homes. The locking cooker valve helps vulnerable customers retain their independence at home and provides reassurance to family, friends and carers. The simple safety device is fitted to existing gas cooker pipework. When the valve is locked, the gas supply to the cooker is stopped. This eliminates the risk of the cooker being unintentionally turned on or left on, and gives peace of mind to the carer or relative that the cooker can’t be used when they leave the house or the room. The carer or relative can easily turn the valve on using the key when the cooker is required, enabling the vulnerable person to continue to use their gas cooker safely.

SGN have so far fitted 187 locking cooker valves in homes across Scotland and the south of England. They work with community safeguarding groups including social services, occupational therapists and emergency services to identify customers who could benefit from the safety device. They’ve now partnered with the other UK gas distribution networks to offer this free service nationwide. They provide this free service regardless of your gas supplier. You don’t need to change energy supplier or inform your supplier of the device.

The living well with Dementia Café has now been up and running since August 2011 and regularly gets up to 50 people attending. It is aimed at those with dementia as well as those with memory concerns. It provides an informal and relaxed environment where people who have a diagnosis of dementia, as well as those worried about their memory, their carers, and informal care givers, can ask questions and get information and advice from health professionals about any memory issues they may have.

We want to reduce the stigma of a dementia diagnosis and give those with dementia – and other memory problems – their families, and informal carers, a place where they can gather, share their experiences and get some practical support in a friendly setting. Visitors will be able to pop into the cafe at their leisure and speak informally to a wide range of professionals and discuss all aspects of memory problems and get signposted to relevant services.

The cafe is open from 1pm to 4pm in Motherwell Football Club’s Centenary Suite on the first Friday of every month.

The Dementia Research Group is one of the UK's centres for clinical research into dementia. It is based at the National Hospital for Neurology and Neurosurgery, which is the lead centre for trialling new drugs to slow the progression of Alzheimer's disease (which causes the majority of dementia).

For further information, please visit their website by following the link here.

Alzheimer Scotland provides advice and support to people with dementia and their carers.

They provide the following services:

Local Information - Concerned about memory loss - These groups may help

Alzheimer's Scotland provides advice and support to people with dementia and their carers, they also provide carer education and outreach support.

A Disabled Person's Railcard cannot be issued at stations. To get a card, complete the application form at the back of the "Rail travel made easy" leaflet, or get in touch by using the following information.

You may be entitled to carers allowance if you currently care for a person who receives attendance allowance (various rates) or disabled living allowance. This person does not need to live with/be related to you.

This weekly allowance is a taxable benefit. Claim forms are available through your local Job Centre Plus (0845 604 3719) and Pension Services (0845 606 0265), or contact your local Social Work office for an appointment with a Welfare Rights Officer.

Alzheimer's Scotland give advice and support to people with dementia and their carers. The services they provide include: information, advice, support, carer education and outreach support. To find out more, please get in touch by using the following information.

You have suggested that you are at risk of getting confused or muddled when you go out and may not be able to find your way home. Often talking this over with an organisation or with someone who understands this difficulty can either allay your fears or give you advice on what to do.

Alzheimer’s Scotland can give helpful advice, this is not to say your memory loss is dementia related, however this service will be able to give you advice and guidance on helping with these issues.

Here's the details you wanted

Help with this page

Complete and submit the form below for support with this website